« In memory of Fuegia Basket, Jemmy Button, York Minster and Boat Memory, who once went to England »

Attracted by travel stories, the Uruguayan wikipedian Jorge Gemetto found himself one day reading « Fuegia », a novel by Argentine writer Eduardo Belgrano Rawson, which tells the life of the inhabitants of Tierra del Fuego, in the southern end of America, early twentieth century. The book narrates the adventures of fictional characters; however, it has a subtle link with reality: it is dedicated to Fuegia Basket, Jemmy Button, York Minster and Boat Memory. But who was Fuegia Basket? The subject of the novel’s dedication would remain a mystery to its reader for some time.

Ten years after that first literary discovery, Jorge stumbled upon Darwin’s “Voyage of the Beagle”, a diary written when Darwin was traveling around the world by ship. His surprise was great when he encountered once again the characters who Belgrano Rawson had dedicated his novel to. This is how Jorge met Fuegia Basket.

What does the Beagle travel diary conceal?

In his journal, Darwin tells the story of how Fuegia Basket, a young girl, and three men from Tierra del Fuego were kidnapped by Robert FitzRoy, the captain of the ship HMS Beagle, during his first expedition through South America in the early 1830s. Fuegia was abducted when she was only nine years old, and FitzRoy tried to use her as currency for the rescue of an English boat, allegedly stolen by the Fuegians. After failing to accomplish his goal, he took Fuegia, along with Jemmy Button, York Minster and Boat Memory (as the others were called), to England.

Fuegia lived for about a year in England. Most of what we know about her comes to us through FitzRoy and Darwin himself, who traveled aboard the second expedition of the Beagle. It was in this second expedition that Fuegia, Jemmy Button and York Minster were returned to their land (Boat Memory died of smallpox in England). Darwin highlighted Fuegia’s intelligence, her charisma and her ability to learn languages: she learned English, Spanish and Portuguese. Her personality made her popular wherever she went, and even the Queen of England, to whom she was introduced, was delighted with her. 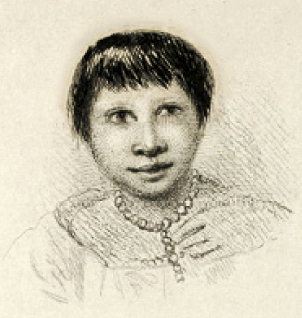 The identity of Fuegia Basket

Fuegia Basket is how this young girl came to be known, but her name had been invented by her kidnappers. Fuegia’s birth name was in fact Yokcushlu. The English kidnappers had an ulterior motive for returning the Fuegians to their country; they thought that by doing so, the English ships would have an interpreter on future trips through the region. Fuegia was a notorious woman, and crew members from different vessels kept recognizing her for several decades after her return.

Despite being abroad for many years, Fuegia refused to join a Christian mission when she reached adulthood: she preferred to share with her family a life linked to their roots and traditions.

Tragically, Fuegia’s story is not unique. The kidnapping of Native Americans, considered savages by Europeans, was a common practice during the 19th and early 20th centuries. Many times, they were subjected to torments in the name of colonial progress, used as specimens for experimentation or exhibited in human zoos.

Fuegia stands out and shines in this painful scenario, since she is one of the few original inhabitants of the southern end of America, whose adventures were narrated in western culture and have survived to the present.

The struggle for the preservation of memory

After reading her story in Darwin’s journals, Jorge did a search on Wikipedia to learn more about Fuegia, but her article was not written in any language. However, the article about Jemmy Button, one of Fuegia’s captive companions, has been available since 2004 in Wikipedia in English and since 2006 in Wikipedia in Spanish. Currently he is also in the German, French and Italian editions of Wikipedia. This absence caught Jorge’s attention, and his experience as a wikipedist soon led him to discover that an article about Fuegia was in fact created in 2011, although it was deleted because it was considered « non-encyclopedic ».

The first question that arose for Jorge was why one of the male captive adolescents would have encyclopedic relevance, while the captive girl, who was described by Darwin as the most skilled and prominent in the group of kidnapped people, was excluded from record.

Determined to preserve Fuegia’s memory, Jorge began to look for additional sources, and he created her article again, arguing in favor of its relevance in the summary of his edition. In order to elaborate the article, in addition to Darwin’s travel diaries, Jorge turned to the chronicles of FitzRoy about the Beagle’s expeditions, and to an article by a project of the University of Cambridge on Darwin’s correspondence.

Telling the story of Fuegia is important for several reasons. In the first place, hers is a very singular vital adventure: a Fuegian inhabitant, considered a « savage », who was kidnapped, educated in England, visited the Queen, lived with Darwin and returned to her land to continue her traditional life.

Second, the story allows us to understand some keys to the history of the encounter of the original peoples of America with the Europeans. The invasion by commercial ships, by the Christian missions and later the enclosure of the lands were all catastrophic for the cultures of Tierra del Fuego, which today are practically extinct.

And third, Fuegia’s experience allows us to unite the two previous dimensions, making it easier to empathize with the individuality of people who were dehumanized and called « savages », and at the same time it opens to us a deeper approach to their culture.

Fuegia’s attitude is outlined in her image

FitzRoy’s chronicles are accompanied by portraits of the Fuegian captives. The portraits were intended to identify, calculate the age, and exhibit the traits of the natives – « the appearance of these portraits reminds me of the current photographs of prisoners » says Jorge.

The portrait left to us by the artist that drew Fuegia’s face, hundreds of years ago, draws attention, on the one hand, to the girl’s firm and serene attitude, and on the other hand, to the way she was dressed and combed to make her resemble an European girl. Above all, putting a face to Fuegia helps us to imagine her destiny, and to rethink from whose points of view is history told.

Since the creation and publication of Yokcushlu’s (or Fuegia’s) portrait happened a long time ago, any original copyright has already expired, and this image is currently in the public domain. So Fuegia’s story, and her image, now belong to us all.

The image was found by Jorge on the website of the Darwin Correspondence Project of the University of Cambridge and added to Wikimedia Commons during the VisibleWikiWomen challenge. We are glad that this challenge has encouraged a wikipedian to look for an image and create an article that didn’t exist until then. In the next stage of this challenge, we would like more people to use some of the more than 1000 images that have been compiled, to improve the visibility of women and their history on Wikipedia.

This post is based on an interview with Jorge Gemetto.