#VisibleWikiWomen: postcards of power and diversity

During the #VisibleWikiWomen challenge, the Wikimedia community and collaborators of the feminist movement focused on making more visible those women relevant to history and our time, who often go unnoticed. The contributions of images exceeded our expectations, and more than 800 new files were uploaded to Wikimedia Commons! The great quality of some of these images, as well as the stories of these women, led us to think: how can we use this valuable common visual heritage in inspiring ways? So, we came up with two ideas. First, we decided to share the experience of #VisibleWikiWoman in a tangible way, through postcards that could be printed and given away at conferences and meet-ups in order to share these images offline as well as online and to thank our wonderful partners. Second, we agreed to continue encouraging the collaboration of more people around the world through an online edit-a-thon in the month of May.

Diversity in the form of postcards

Selecting only a handful of them to design postcards was not easy, because only 10 women can not represent them all. Ultimately, we chose to celebrate 10 inspiring images of extraordinary women as a starting place. We share this gallery of images of notable women, many of whom you can learn about, and now also see:

Anyone is free to download, print and distribute these postcards, which are under a Creative Commons Attribution-Share Alike license, on Wikimedia Commons and Flickr.

We are very glad to see the results of the challenge because the files uploaded to Commons are really useful to illustrate Wikipedia articles that previously didn’t have images. But now, we find that there are pictures of relevant women who don’t have an article on Wikipedia in any language, although other sources of information, which could become Wikipedia references, mention them.

The images of #VisibleWikiWomen have allowed us to discover the biographies of some fascinating women – all of whom deserve an encyclopedic biography. We therefore invite you to contribute to uncovering the life stories behind these images by joining our edit-a-thon!

Jamaican Judge Margarette May Macaulay is the current President of the Inter-American Commission on Human Rights, elected in 2015 by the General Assembly of the OAS. In this role, which is an endorsement and recognition of a career and personal commitment to human rights, the Commissioner receives the requests of individuals and delegations that denounce human rights violations throughout the continent. Wikimedia Commons, now has photos of Macaulay — thanks to photos made available by IACHR — but still no Wikipedia article tells us about her life and career.

Berta Zúñiga Cáceres is the general coordinator of the Civic Council of Popular and Indigenous Organizations of Honduras (Copinh). She holds the same leadership role as her mother, Berta Cáceres, who held the post until she was killed on March 2, 2016. Under 30 years old, Berta is not only recognized for being the daughter of one of the most renowned activists in Honduras, but for actively continuing her mother’s fight for the defense of the environment and life — a local struggle with global influence. The biography of Berta Zúñiga Cáceres should appear on Wikipedia for the merits and events of her own life, so as not to repeat the story of her mother, Berta Cáceres, or Marielle Franco, whose articles were only available after their tragic deaths.

Nesma Abdel Aziz is a young Egyptian marimbist who is very popular in her country and increasingly recognized internationally. Her compositions mix Eastern and Western elements in a very special way, which captivates audiences of both regions. In 2000, she performed the Hummel concerto for percussion with the Cairo Opera Orchestra in the Cairo Opera House, celebrating the 75th birthday of Bertold Hummel, who was attending the concert. This performance made Nesma the first musician to play this concerto in Africa. She has been invited to represent Egypt in the second festival of “Women Creators of the Two Seas: Mediterranean and Black Sea,” which was held in Thessalonica. Now, there is a beautiful photograph of Nesma playing her instrument on Commons. It would be great to also have her biography on Wikipedia.

Rabia Djelti is a notable Algerian novelist, poet and translator. She is also a prominent professor of contemporary literature at the University of Algiers in Magreb. Forced to go into exile in 1995 and survive many challenges, including a car bomb attack, today Rabia has gained a cherished place in the Algerian, Maghrebi, and Arab literature scene. She is among the few Algerian writers who are well-known abroad. Her poetry is an amalgam of her personal experiences, her feminine sensitivity and her strong social critiques. Some of her work has been translated into French.

We want to include more women in the production and content of knowledge on the Internet, but we also aim to make the knowledge that is already there available to a diverse range of communities around the globe. Most of the Wikipedia articles of the rest of women portrayed in our postcards are only available in a limited number of languages, so that’s another way you can engage in correcting the skewed representations of knowledge in the Wikipedia and the Internet itself. For more information on the women featured in the VisibleWikiWomen Challenge, visit our Wikidata item list.

How else can you collaborate?

Edit-a-thons are exciting! You can engage in discussions, share resources, write and search for sources, collaborate with other fellow wikipedians and then see it all published.
Our #VisibleWikiWomen edit-a-thon has started a week ago, and we already have several articles about these women on Wikipedia in German, Spanish, Norwegian and English languages… and we are having a whole lot of fun in the process!

Here is how you can be part of the editing: 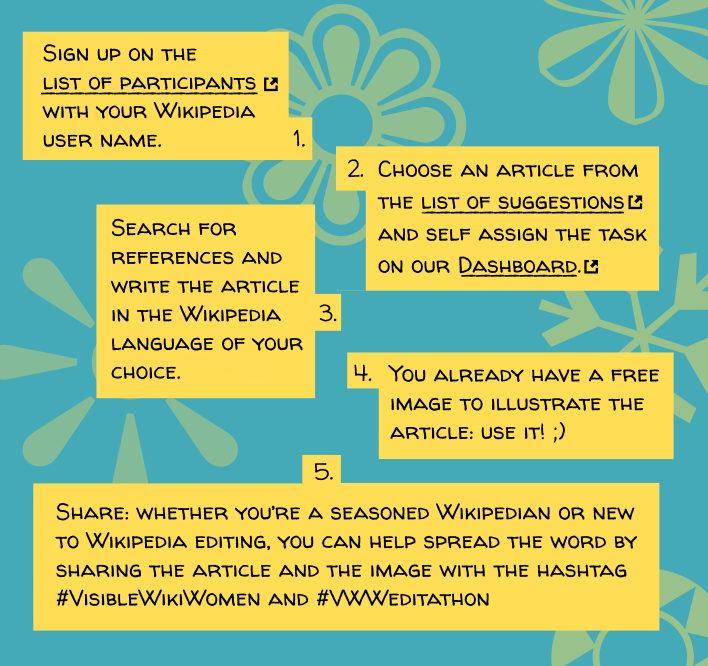