Decolonizing the Internet: What is it about?

As the Whose Knowledge? team, we’ve been talking for a while now about issues of power and privilege inherent in the ways knowledge is understood and the ways the internet is designed and experienced. When we combine these issues, we come to questions about how power and privilege manifest in public knowledge online. In 2018, we know that 75% of the world’s online population is from the global South, and 45% of all women in the world are online. At the same time, we know that content online remains heavily skewed towards rich, Western countries.

We feel strongly that this hidden crisis of “unknowing” – that we do not adequately know each other, our histories and knowledges well enough in a rich, diverse, multilingual, multicultural world – is at the core of many other crises of violence and injustice in our world. Many of us remain unseen and unheard, and this is made worse when our histories and knowledges are missing online. We also feel that the effort to change this – to re-imagine the internet, and knowledges on it – needs a multitude of us working together. So the idea for Decolonizing the Internet was born: a conference event in which “unusual” and “unlikely allies” – people who, like us, think about knowledge, the internet, or both – get to meet, talk, and scheme together to bring our different forms of knowledge onto the internet!

Structured data, the pieces of information that are easily read, understood, and processed by machines, is at the core of how the internet works. Countless apps and platforms are built using such structured data systems, including content providers like Google and collaborative initiatives like Wikidata. Yet, these databases present and organize elements in ways that are informed and structured by and around specific regulations, traditions, and epistemologies. As a result, in an attempt to categorize the world, they prescribe certain frames and worldviews.

So how can we #DecolonizeStructuredData as we know it? On October 13th, 2021, we gathered over 40 knowledge activists, community organizers, and tech-builders in a safe, collaborative space for the event “Decolonizing The Internet’s Structured Data,” a pre-conference of WikidataCon 2021. The event was organized in partnership between Whose Knowledge, Wikimedia Deutschland, and Wiki Movimento Brasil.

By turning to questions of power, we asked whose views, whose agenda, whose ontologies (categories), and whose decisions build and sustain these systems. Initially, panelists framed what structured data means to them and why it is essential to anchor these systems in multiple epistemologies. After splitting into small groups, participants shared insights on the subject and, collectively, discussed practices and next steps.

Learn more about the conversation in our Twitter thread, and stay tuned for our report!

The internet we have today is not multilingual enough to reflect the full depth and breadth of humanity, and most online knowledge today is created and accessible only through colonial languages.

In October 2019, we gathered with a specific focus on building an agenda for action to Decolonize the Internet’s Languages, for two-days prior to MozFest 2019 in London. We brought together 30 artists, activists, archivists, mappers, translators, linguists, researchers, techies, funders, Wikimedians, Mozillans and much more!

During the meeting, our partners from the Centre for Internet and Society and the Oxford Internet Institute also shared their initial findings for a State of the Internet’s Language Report that we’re working towards for 2020.

You can check out the photo gallery and download the report.

Our First Decolonize the Internet Conference in Cape Town, 2018 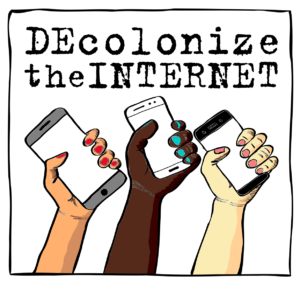 In July, we hosted a Decolonizing the Internet conference in Cape Town as a pre-conference for Wikimania 2018. With the support of our funders, communities, and allies, we brought together a room full of dream-chasers and change-makers. We were 67% women or trans, 68% from the global south, and 77% people of color. This was the conversation we’ve all been waiting for, and these are the people whose voices need to be heard.

Read more about the event.
Check out the photo gallery.
Download the report.