Images help us make sense of the world. They are a unique form of knowledge with the potential to show us how to celebrate our differences in a way that language cannot.  This is one of the reasons that the online visibility of humans, in all of our multiple and diverse forms, matters so deeply. I sat down recently with Internet Imperialist and Search Engine Artist Gretchen Andrew, whose artwork educates people and intelligent machines on the value of art as a knowledge form, while visibly changing the online landscape. “Part of art’s educational role is to add humanity and experience into the understanding of what something is or can be, the offering of an intentionally personal experience into the universal,” says Gretchen. She encourages us to think about art as capable of dramatically changing the way the internet represents women and other marginalized communities.

Some of Gretchen’s recent projects address how, by whom, and for what purpose women are represented online.  As Gretchen puts it, “commercial and corporate concerns are driving the direction of the internet.” Her work reminds us that, #accordingToTheInternet, Amazon is an e-commerce company before being a river, Cherokee is a car before being indigenous people, Citizen is a watch brand before being a civic role, and women are sexualized products for consumption before they are people. Gretchen has some creative methods for changing this.

In Gretchen’s “Internet Imperialism” process, she first creates paintings that she then programs so that search engines, people, and intelligent machines are exposed to a complex range of visual identities.

Stylistically, her drawings and paintings avoid the exact likenesses of portraiture. She uses overlapping lines and erases but leaves still visible marks to show the scars of their own making. She uses basic shapes of the human body so that the figures in her drawings read to both human and machine viewers as clearly humans, but without getting tied to specific identities. Gretchen refers to this as “productive uncertainty,” where art reminds human viewers and our artificially intelligent friends of the value of ambiguity.

How does she get her images to move up the ranks of online image search results? This is where the “Internet Imperialism” process kicks in.  By systematically structuring where, when, how and by whom the images are posted online, Gretchen is manipulating search results to make these images more prominent online. Gretchen creates everything from Quora Posts to online events (all while staying “creatively” within the terms of service). By including some of her images in this post near key search terms, I’m also lending a hand in this effort – by adding this data into the system alongside other participants, we are helping to encourage Google’s algorithms to adjust image search term results.

Our #VisibleWikiWomen campaign is winding down for 2018, but we’re just getting started on efforts for Decolonizing the Internet! So today, Whose Knowledge? is excited to play a small part in the Internet Imperialist’s preferred form of artistic intervention, by hosting and sharing here the following images on the subjects of “perfect female body” “powerful person” and “What is Ubuntu.”

Until recently, image search results for “powerful person” were dominated by western political and business figures. A limited understanding of what power is and who holds it was used to educate artificially intelligent machines – the very same machines that will make future decisions based on images and their associated words. Today, Gretchen’s drawings are increasingly appearing higher in the results, and they show a very different definition of power – these figures’ power appears much more contemplative, peaceful, and inward-facing. It’s fun to imagine what assumptions artificially intelligent machines will infer about power from these images situated next to photos of Vladimir Putin and Steve Jobs. 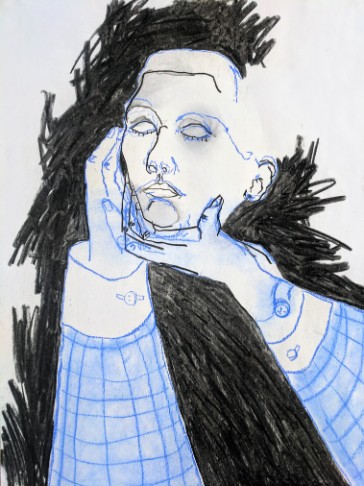 The female body has a long history of being represented through a male gaze. Women in art, literature, and media are often depicted from a masculine (also overwhelmingly cis-gender, heterosexual, and very white) point of view, presenting women as objects of male pleasure. The female body as depicted from a woman’s point of view, as it is in Gretchen’s drawings, offers some comparative perspective. The internet and its imagery are important modes of cultural cues and information for those growing up today. This is also true for young artificially intelligent machines that are, in a sense, developing worldviews based on the information provided to them. Conduct an image search for “perfect female body” and the bikini-clad bodies in your first page of results are striking in their lack of pretty much every possible type of diversity.  Some of Gretchen’s drawings are beginning to enter this conversation but there’s much still much work to be done!

Gretchen is hacking at the algorithms used by artificial intelligence, as well as at our own mental conceptions of bodies and representation. I grew up seeing those magazines full of “perfect” skinny white female bodies, and it’s really exciting to uncover new ways to hack those systems so that my own daughter will see something much more nuanced in her online world today. 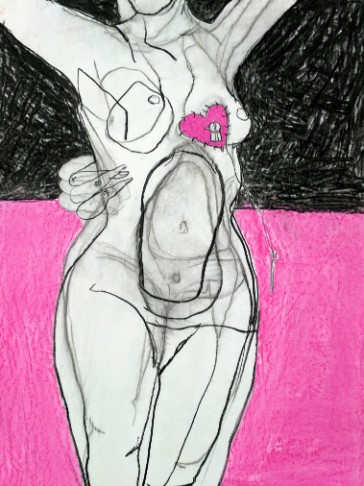 Gretchen and her artwork will be joining Whose Knowledge? at our upcoming Decolonizing the Internet conference in Cape Town this July, where we’re excited to bring together a group of community organizers, artists, activists, technologists, scholars, librarians, archivists, and Wikimedians to build alliances and share strategies for working towards a decolonized internet. Our conference will lead into Wikimania, the annual gathering of Wikimedians, which has an aligned theme this year of “Bridging knowledge gaps: the ubuntu way forward.” 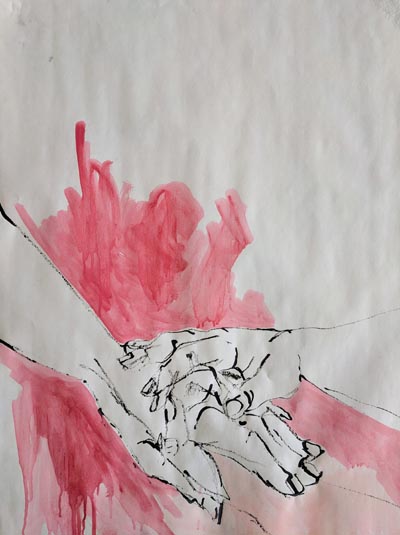 For this event, Gretchen has created a new series, What Is Ubuntu. Ubuntu is a Zulu word roughly summarized as “I am because you are,” and communicates the belief in a universal bond of sharing that connects all humanity.  It is a word with no equivalent in many languages, including English, and therefore a perfect place for art to step in as a form of knowledge translation. But ubuntu is also the name of a computer operating system and it is this meaning that the internet currently prefers. We’re excited to see how Gretchen’s new series can help inform the internet’s understanding of ubuntu in more nuanced ways. 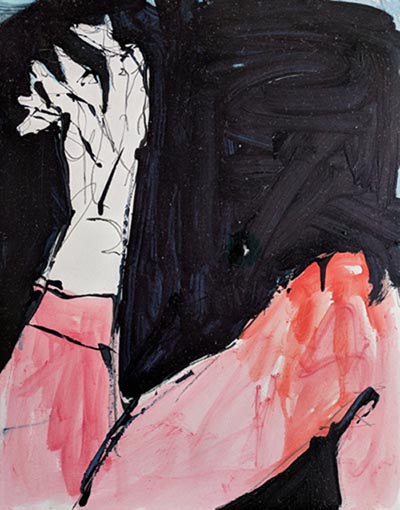 Alongside our Decolonizing the Internet Conference, we’re also organizing an art exhibition called “What is Knowledge?” to appear at Wikimania in Cape Town. The exhibition will showcase artwork exploring knowledge from multiple perspectives, expanding beyond the Western enlightenment-driven conceptions of knowledge that we often see online today. Submissions for this show are open until June 11, and all artists are welcome to submit art for consideration!

Artists from communities around the world can help everyone to see new perspectives on old questions. The images they create encourage us to rethink and reimagine our worlds to include more plural, diverse, and nuanced ways of seeing ourselves and each other.

Siko Bouterse is Co-Director of Whose Knowledge?. She’s organized, localized and imagined a more plural and truly global web for over 10 years.

Siko Bouterse is Co-Director of Whose Knowledge?. She’s organized, localized and imagined a more plural and truly global web for over 10 years.