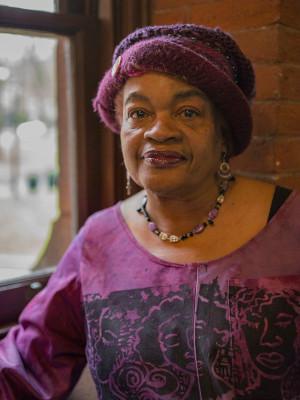 Let us introduce ourselves! The Black Lunch Table (BLT) is an ongoing collaboration begun in 2005 between artists Jina Valentine and Heather Hart. After meeting at an artist’s residency and organizing around literal lunch tables, the project has taken the lunchroom phenomenon as its starting point. The BLT’s primary aim is the production of discursive sites, where cultural producers engage in dialogue on a variety of critical issues.

With a democratic rewriting of contemporary cultural history as one of our goals, Black Lunch Table turned to Wikipedia as a platform to increase visibility for artists of the African Diaspora in 2014. Wikipedia is a platform through which we can fill holes in the documentation of contemporary art history and increase the presence of artists of the African Diaspora; satisfyingly we can also very directly see our impact. The data about the editors of Wikipedia, those who ultimately write and control the information that so many access, are staggering: 86% of editors are male and most of them are white. We looked to Wikipedia as a space that we could encourage people of color and women to join while asking white male editors to focus on gaps in coverage on Wikimedia. In 2018 we were a part of editing 1,000 existing articles, adding 304, 000 words, training 231 new editors, and creating 215 new articles. That’s great!

Last year, when Whose Knowledge? approached us to participate in their first #VisibleWikiWomen campaign it was an easy partnership. The questions they were asking “How can we help to deepen the presence of women online? Why is it important to make women visible online?” These questions echoed our own concerns about artists visibility and that of all marginalized groups. #VisibleWikiWomen also holds a special place in our hearts as we’ve started a photo initiative at many of our edit-a-thons. By hiring photographers to join our events we are able to professionally photograph and upload images of artists to Wikimedia Commons. 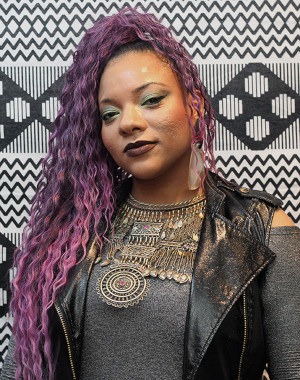 For instance, photographer Mary Osunlana got a beautiful shot of the multifaceted African-American artist Dindga McCannon who was missing a photo in her Wikipedia bio. Dindga describes herself as “a multimedia, mixed media artist, currently exploring fiber arts […], painter, printmaker, author, illustrator, artists book maker, wearable art maker and teacher.” She also co-founded “Where We At” – one of the first exhibitions of professional black women artists in the US in the 1970s. Dingda was included in the corrective historical survey We Wanted a Revolution: Black Radical Women, 1965-1985 at the Brooklyn Museum. We are more than happy to have been able to make a free-licensed portrait of her available on the internet today.

Another trailblazer woman we photographed is Abigail DeVille, a highly creative and groundbreaking artist based in New York city. Abigail uses bricolage, painting, sculpture, and often performances too, to create site-specific installations. She focuses on the stories of marginalized peoples and places, by bringing attention to issues around racism, gentrification, and violence. We’re very excited to finally see her face in her Wikipedia bio now.

As we provide images of artists (and women) missing them on their Wiki page, the photo initiative and #VisibleWikiWomen as a campaign at large, serves as another way to educate the public about Wikipedia. We have found that this initiative allows for participation even if folks don’t have time to commit as an editor. It has been a great addition to our edit-a-thons so far and we look forward to sharing more images and encouraging more organizations.

What to know and see more?