The Life and Death of Marielle Franco on Wikipedia

On March 14th, I woke up in California to a flurry of shocking messages from friends, social media posts and press articles about the previous day’s assassination of Marielle Franco, a young Brazilian politician and outspoken human rights activist. I didn’t know Marielle personally, probably because I have been abroad for the last 8 years. But the little I knew about her was enough to know that she was unique and special. 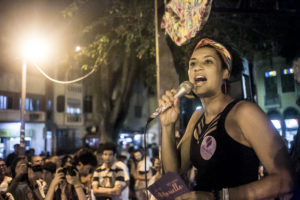 Born in a favela in Rio de Janeiro, Marielle was an exception to many of the statistics about Brazilian black women. Black women in Brazil are the most affected by unemployed and earn far less than any other demographic – as of 2007, black women earned only about half of what white women make and about a third of what white men make in Brazil. Marielle got her master’s degree in public administration, became a fierce and outspoken critic of police brutality in the favelas, and was one of the most voted-for politicians in her own city. Her achievements made her an exception in a country where more than half of the population is brown or black but only 12% have access to higher education.

On March 14th, though, Marielle’s death added to another disturbing trend in Brazil. While murders of white women have decreased significantly since 2003, murders of black women increased by more than 50%.  Being a black Brazilian myself, I know that it’s not every day that a tragic death of another black woman from the Global South becomes national and even global news. I was shocked, sad and deeply interested in learning more about Marielle and her life. 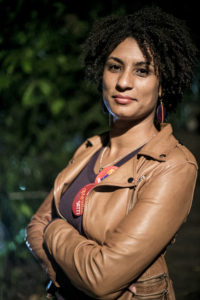 My first and natural place to start was the Portuguese Wikipedia. I searched for her name and her article popped right up (an English version exists too). There she was! I was quite surprised to find the article in such good quality and even more astonished that her article had a beautiful freely-licensed picture on it – this isn’t always the case for black women, especially from the Global South, who are often overlooked on Wikipedia. Despite the horrible reason that brought me to her article that morning, I had a feeling that things were changing for the best on Wikipedia and the world. I was happy to see that the life and the remarkable deeds of this black queer woman, mother, young politician and human rights advocate, who looked just like me, was already present, visible and acknowledged on Wikipedia.

What I didn’t know was that Marielle’s article hadn’t existed on Wikipedia at all, just the day before. Although someone had tried to start an article about Marielle in 2017, it was deleted by the volunteer editors who write Portuguese Wikipedia. In the June 2017 deletion discussion, only one editor, Joalpe, was in favor of keeping Marielle’s Wikipedia article alive on the site. His voice was not enough. A group of six editors of the Portuguese Wikipedia decided that Marielle Franco didn’t deserve an article on the site, because she didn’t meet Wikipedia’s criteria for “notability” – one of the policies that helps volunteers decide who belongs on Wikipedia and who doesn’t. They voted to eliminate the article and make Marielle’s life and legacy invisible on the 12th most-visited website in Brazil, and in one of the top ten websites in the world. According to this group of editors, Marielle’s life, work, and everything that made her exceptional as a local politician, activist, and living symbol of hope for thousands in Rio de Janeiro were not relevant enough to justify a page about her on Wikipedia.  It was only after she was killed on March 14th that Joalpe was able to make a successful case for reinstating the article on Wikipedia, and on March 15th I was able to read about this remarkable woman’s life, as well as her death.

Before being executed in the streets, Marielle Franco was executed on the Portuguese Wikipedia. I strongly believe these things are intertwined.

This story is all-too-familiar for many of us who add content about marginalized communities to Wikipedia. Arguing for women’s notability in deletion discussions is an annual tradition for many organizers of March events around the world that aim to write more women into Wikipedia. Immediately after an Art+Feminism edit-a-thon in Uruguay last week, for example, eight articles about Latin American women were nominated for deletion on Spanish Wikipedia, including the international award-winning writer Edda Fabbri, the poet Alicia Porro, and pioneer journalist and activist Dolores Castillo.

Wikipedia’s notability standards were originally setup to stop you from using Wikipedia to promote your garage band or a friend’s small home business, and having some standards for what kind of content belongs in an encyclopedia is entirely reasonable… in theory. In practice, though, Wikipedia’s notability guidelines require “significant coverage in reliable sources that are independent of the subject,” and there are a lot of judgement calls involved in determining what’s significant, reliable, and independent. While Wikipedia strives for neutrality, most of its volunteers are still white men from the Global North – only 1 in 10 editors are women – who bring their understanding of the world with them when they edit Wikipedia. And since women from the Global South tend to be some of the people most often left out of our history books, academic journals, and mainstream news sources, women like Marielle are much more likely to be seen as non-notable than a white male politician from the United States.

Until they die. After a death, sometimes more sources are created and the figure is now considered notable (like Marielle)… but not always. When Delta Meghwal, a Dalit woman from India, was murdered, English Wikipedians decided to include mention of her on Wikipedia, but not by creating an article about her as a person. You’ll learn about Delta only in the article called “Delta Meghwal rape case.” In other words, for many black and brown women from the Global South, rape or death is what makes us notable, but not our groundbreaking lives or work.

According to a local news outlet, Marielle’s Portuguese article had approximately 70,000 pageviews the day after her assassination. I was one of the many people who chose to trust Wikipedia to tell me more about this incredible woman, who defied all the odds that usually define the lives of black women in Brazil when it comes to rights and opportunities.

Yet despite all of Marielle’s accomplishments and unique trajectory, she was not considered notable enough to be visible on Wikipedia until her brutal assassination happened. It was only after much international reporting and outcry surrounding her death, that Marielle’s article was also created in 16 other language Wikipedias. 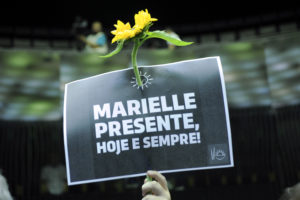 The world is full of amazing women like Marielle whose lives and contributions are deeply important and meaningful, and their stories deserve to be told. I need and deserve to see others like me in the world’s online encyclopedia. And, let’s include us while we’re alive, not just after something horrible happens to us.

As we host the #VisibleWikiWomen challenge to add pictures of notable women to Wikipedia this March, Marielle’s story is a painful reminder of how much remains to be done to raise women’s visibility online. Initiatives like #VisibleWikiWomen and the work of Whose Knowledge?, as well as initiatives led by so many communities and partners around the world, remains critically needed. Marielle’s article should have been a tribute to her exceptional life while she was still alive. It’s now a post-mortem tribute to everything she has done and to all that she represented. May her fight continue to inspire us as we advocate to center the voices, the knowledge and the lives of the marginalized on and offline.

This blog post is also available in Brazilian Portuguese.